In the Mi’gmaq language, Gespeg means “land’s end.” Gaspé is associated with the origins of the country and the beginning of Western history in North America: the cross erected by Jacques Cartier in 1534 earned Gaspé the title of “Birthplace of Canada.” Protected by mountains, Gaspé Bay shelters recreational boats and cruise ships from all over the world. Gaspé has three internationally renowned salmon rivers, the York, Dartmouth and Saint-Jean, which are frequented by over 1 500 anglers every year.

L'Anse-à-Valleau: Stop at the tourist welcome bureau in L’Anse-à-Valleau. The name of this community evokes a people of the sea and comes from a natural and daily phenomenon: the tides. The parish of Saint-Maurice-de-l’Échouerie brings together other hamlets whose names are just as evocative: Pointe-Jaune (“Yellow Point”), Saint-Maurice and Petit-Cap.

Rivière-au-Renard: Discover the lively world of fisheries in this municipality (wharves, fish processing plants and boat fleet). Rivière-au-Renard is rightfully known as the “Capital of Fisheries,” since fish and seafood of all kinds are unloaded and processed here. Savour these delicacies in fish markets. Nearby, the Plage de la Sablière (beach) offers rest areas and playgrounds. The marina provides docking services to recreational boaters. The marsh in the middle of the village is a great place for birdwatching, while the lookout at the chapel offers a view of the entire village.

L'Anse-au-Griffon: Some say that Griffon was the name of a ship that sailed along the coast in the 18th century. Others believe that the name comes from Gris-fonds (pronounced the same way and meaning “grey bottom”) in reference to the colour of the seabed. There is also a legend about how the Devil, hearing the desperate cries of shipwrecked sailors, left the marks of his claws (griffes) on their rowboat.

Cap-des-Rosiers (“Rosebush Cape”) was named after the many wild roses that once grew here. For sailors, the cape marks the point where the St. Lawrence becomes a gulf. From here, an officer sighted Wolfe’s fleet in 1759 and immediately sent a messenger to Québec City. This area has witnessed numerous shipwrecks, which led to the construction of a lighthouse in 1858. Designated as a historic monument in 1977, it is the tallest lighthouse in Canada. Cap-des-Rosiers is also the gateway to Forillon National Park. Also, Du Banc trail; harbour; observation tower; picnic area; and site commemorating the wreck of the Carricks, an Irish sailing vessel carrying 187 passengers.

Cap-aux-Os: In 1623, while travelling through Gaspé Bay, the missionary Gabriel Sagard described how the sounds of the whales and the noise of their blows interfered with his sleep. The name of the town (which means “Bone Cape”) was inspired by the many whale bones found along the beach. Enjoy the view of Gaspé Bay and the Penouille Peninsula, the Boom Defence dunes and Plate de Pointe-Saint-Pierre Island. Follow a nature trail that clings to the mountainside, winding along the village for over 7 km. Here, horseback riders, cyclists and hikers can admire various species of regional forest flora. West of the village, discover Fort Peninsula, a vestige of World War II 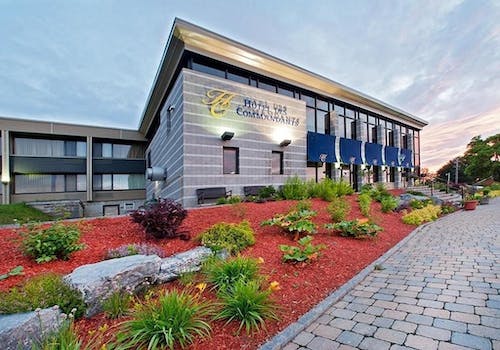